We arrived at the Cardiff Martial Arts Centre on Saturday October 24th ready for the first UK Seminar of Canadian Systema instructor Emmanuel Manolakakis who is known affectionately as “Manny”.
Manny began day one by laying out what he was intending to teach and help us all achieve in our personal goals. By explaining how Systema should be a 100% training program 24 hours a day he displayed the methodology of Systema, showing it is not specifically a ” Martial Art” rather a way of living your life wholly and completely with the “Art’ actually coming individually from the student themselves. He explained how this was like two musician having been taught to play identical instruments in exactly the same manner, yet both musicians end up creating two completely different yet equally beautiful tunes.
Through the highlighting of how ‘bad effort” can make everyday things harder, Manny helped everyone become aware of how relaxation coupled with fullness in the body can improve efficiency for less effort without loss of manoeuvrability. Simply by finding the point where the individual felt most comfortable in their work, led to many finding out how little they really knew about themselves. With Manny’s uniquely positioned insights we were able to make corrections that aided everyone in getting the best from their movements.
It was a strange situation to experience the fact we were now working at a base level of Systema that was not only taxing to the psyche and pushing our personal thresholds, but was one that also made everyone feel comfortable within themselves and in their work.
After a short recess the class reformed and continued with getting used to moving on the ground under a partners bodyweight by using the core of the body, thereby assuring the hands and legs were available for striking rather than being occupied in the control of and defence against a partner. This was then expanded upon by the incorporation of holds and grabs, then later when standing using your weight to move your partner and to support your partner when working as a team against assailants.

Day one concluded by studying the use of fullness to overcome grabs. Manny explained the similarities between the joints in the arms and legs to that of the body demonstrating the ease of overcoming an exceptionally strong grabs, both single and double by following the direction given to you by the attack itself. Everyone was then give free time to play with the lessons to experiment with and experience their own personal developmental progress.
The class disbursed to later reconnect at a local eatery for a continuation of Systema through socialising and debriefing on the day’s events, a most important and enjoyable way to continue ones training.
Day two of Manny’s seminars kicked off “literally” by working with the legs. We all have an idea on how to use the legs as a weapon, but Manny explained how the correct placement of the foot and leg can be just as useful work as can kicking. We began by becoming aware of our legs through the use of tension, controlling the tension from leg to leg in proportion to the need. Then progression on to exploring the capability of the joints of the leg, building to a point where all of the joints were in constant motion simultaneously. The class then progressed on to using the feeling of fullness that was created during the tension work to use 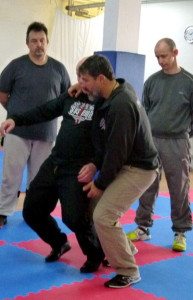 the legs only for manoeuvring on the floor, this would again enabled the arms and hands to be employed in other duties.
Once the class had become comfortable with this drill we progressed on to standing and learning to correctly “feel” the foot. It was stressed by Manny how important it was to be able to feel not only the feet, but also the fist. We were asked to simply walk as though we were on a new and pristine beach, and as we walked we should visualise placing the foot equally on the sand and in differing positions, so no one could tell in which direction we were walking. This exercise would aid in the confident placement of the foot when executing a trip or manoeuvring around the body of a partner.
We moved on to structure braking by the implementation of slight weight application causing our partner to indicate a weakness within their structure, of which we took advantage first with the hand leading the leg then onto using the leg immediately.
One of the main topics raised was the common theme of “Solo Training”, as many of our Systema brothers and sisters find they are frequently isolated from regular class work by distance. Manny was asked if would provide some ideas on coping with such situations and ran the class through different examples of using your own body to work with the environment on many of the previously covered subjects.
After a short recess the class reformed to continue working with the arms and hands, Manny referring back to what we had covered on feeling the foot to now relate it to feeling the fist. Working with the back to the wall Manny demonstrated the placing of your body weight 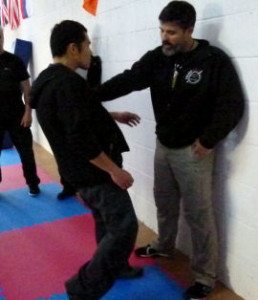 onto the end of the fist, and how that weight can be adjusted to vary the amount of constant force delivered throughout the punch. The class worked on stopping an advancing partner with a relaxed punch, and that punch should feel nothing but normal irrespective of the degree of force application.
All to soon it was time to circle up and end what was an awesome weekend of friendships both old and new, I am without a doubt look forward to the next chance I get to work with Emmanuel with great anticipation. His demeanour being one of calm confidence is freely passes on to all with unabashed abundance.

Andy Seatherton has been practicing martial arts since 1972, when he began learning Judo in Exeter, Devon in the South West of England. Andy has been teaching Systema since 2012 having attended many Seminars with some of the world’s top Systema masters over the years, including Vladimir Vasiliev, Martin Wheeler and Emmanuel Manolakakis Andy is passionate about martial arts that are effective and practical, having previously studied Judo, Aikido, American Kenpo, Ju-Jitsu, Tang-so-do, European Boxing and Escrima.
View all posts by Andy Seatherton →
Tagged  Canada, Emmanuel manolakakis, fight Club, Manny, russian martial arts, systema england, Systema Practice, systema seminar, systema south west, systema uk.
Bookmark the permalink.