This post is about Day 2 of the Lengends of Systema Seminar in October 2014, held in Shropshire, England. Be sure to read the run down of Day 1 of the Systema Legends Seminar, before reading this post which continues on from the first day’s events, with masters Mikhail Ryabko and Vladimir Vasiliev.

After a good night’s sleep and an exceptional hearty breakfast, the class reassembled in Wenlock hall and warmed up in preparation for the day ahead.

Mikhail led the class off again and asked everyone to diligently repeat the breath holding exercises from day one, but this time hold on the exhale. Working again from one

repetition up to fifteen for each of the core exercises. This felt very different from day ones session, although a very hard task to complete the resulting tide of calmness throughout the class was palatable. I personally found my core body temperature seeming to increase, leaving me warm, calm and relaxed.

Mikhail then progressed to give instruction on how the observation of an opponent’s body language can give valuable clues to their true intention. Tasked with the execution of clandestine attacks through the use of another’s body to shield the true intentions the attacks were executed. As Mikhail sensed an opponent’s intention he calmly moved in to a position that best afforded him the advantage. Even when the opponent came from a less likely angle of attack, a slight natural adjustment in Mikhail’s posture and once again he had the upper hand.

After breaking off into groups of three to practice this drill, the class was called back to watch Mikhail demonstrate the skills of weapon retention. With knife in hand Mikhail waited for a disarm to be executed. Each time an attempt was made to wrestle the blade from Mikhail’s firm but relaxed grip, he would make an adjustment taking his opponents structure away or trap his hand with the knife in such a position that would have resulted in the detachment of fingers. Even when an opponent did get a hand grasp on the blade, Mikhail simply closed his grip around both blade and hand trapping the opponent keeping him under his control.

Vladimir began by having the class lay on the floor with a weapon close at hand but not touching it. Everyone was instructed to move around on the floor without contacting anyone else, and all the time keeping their weapon within grab range still untouched. This progressed further to making contact as you move on the floor this time whilst holding the weapon.

The class gathered around to observe more example drills from Vladimir before moving off to practice the demonstrated methods of, moving through multiple armed opponents 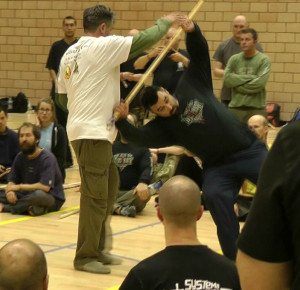 using their weapons against each other, tying each up or using a weapon still in the hand of one opponent to strike the other. This was followed by other drills in the removal of a single weapon pushed onto the body through relaxed movement, staying relaxed and constantly in motion and modulating your height as six or seven partners simultaneously poke you with staffs, how not to focus on the weapon but to work against the body, the diffusion of vision so as not to be transfixed upon one opponent or one weapon, and working stick against knife, all explained with that familiar smile and good humor that is Vladimir. 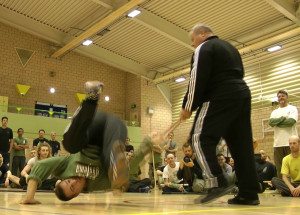 attempting to take your staff. With the ease we have been experiencing all weekend Mikhail dispatched his opponent time after time, with slight twists of the staff. At times Mikhail’s opponent could not even raise himself from the floor. Each time Mikhail would cause his opponent to over stretch loosing balance and posture, this was a truly spectacular example of control and dexterity

Unfortunately all good things must come to an end and the class was circled up. With many thanks to Mikhail Ryabko and Vladimir Vasiliev for their tuition, to Valerie for her hard work behind the scenes, and to Jamie, Matt and their crew for making it all such a successful weekend of the best of Systema.

Andy Seatherton has been practicing martial arts since 1972, when he began learning Judo in Exeter, Devon in the South West of England. Andy has been teaching Systema since 2012 having attended many Seminars with some of the world’s top Systema masters over the years, including Vladimir Vasiliev, Martin Wheeler and Emmanuel Manolakakis Andy is passionate about martial arts that are effective and practical, having previously studied Judo, Aikido, American Kenpo, Ju-Jitsu, Tang-so-do, European Boxing and Escrima.
View all posts by Andy Seatherton →
Tagged  martin wheeler, mikhail ryabko, systema england, systema legends seminar, systema south west, systema uk, vladimir vasiliev.
Bookmark the permalink.