The Legends Seminar 2014 DAY ONE

The long awaited Legends seminar hosted by Jamie Robson and Matt Hill, kicked off on the 4th of October in Lillieshall, Shropshire, at the National Sports and Conference Centre. The instructors in residence were Mikhail Ryabko and Vladimir Vasiliev. 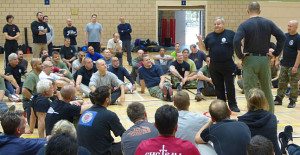 The first session began with Mikhial giving instruction to the nearly 200 strong class of attendees, in structured methods of recovery through the use of breath holding whilst using the four core exercises of Systema. This was not a quick warm up, it was a deep study of yourself and how you and your body react when placed under stress and duress. The exercises were executed slowly and increasing in number with each cycle of recovery. Students were encouraged to examine the before and after effects on their body, and to push their own limitations to eventually reach a total of 15 repetitions on one held inhalation of breath. Although the physical aspect of this exercise was not the main goal, it is interesting to note that in completing 15 cycles one would have performed 120 repetitions of each exercise.

The class continued with Mikhail showing the subtleties of dealing with a single opponent. It was also good to see Martin Wheeler in attendance. He was warmly greeted by the instructors, but was given an extra special welcome by Mikhail when he asked Martin to attack him with a knife. With smooth effortless efficiency Mikhail’s hand met Martin’s attack, disrupting his balance and structure with a honed efficacy of a true master. The next opponent found Mikhail’s fist on its target, stopping the attacker before he realised he had been stopped. The energy emanating from Mikhail could only be described as tangible relaxation. The class then broke up into pairs to practice the lesson of knife disarming in a relaxed and none threatening manner, an attempt to emulate Mikhail’s example of pure Systema.

Mikhail later demonstrated his expertise in the use of the Cossack whip, by applying it liberally to the body of Matt Hill who was asked to attempt to attack Mikhail with a knife.

After breaking for lunch the class resumed this time under the tuition of Vladimir. Continuing the aspect of unarmed combat, but now against multiple opponents. Students 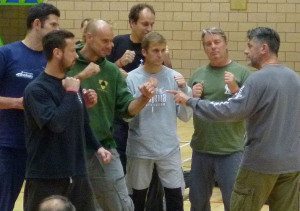 were shown how to swim between their opponents without making contact, this was further amplified when the entire class mêlée in the training hall to apply the same drill on mass in a crowd of almost 200. The lesson progressed on to making contact by striking, first in groups and then again in a crowd. The class worked on opponents holding your arms and escaping binding the attackers into each other as you did, then progressing on to using one opponents arms to strike the other. Further work was performed on receiving strikes from multiple opponents and using none aggressive body language to make yourself appear none threatening.

And all of this work being performed to the intermittent groans of…. ahh?….pleasure emanating from a corner of the training hall, where Alexei Saporov was providing the hardy with an authentic Russian massage using the Cossack whip and deer antlers.

At the end of the first day Vladimir held a question and Answer session for instructors and instructors-in-training. This gave a chance for all to get answers to any of the aspects of

The group broke up to shower and have dinner before meeting in the Queen’s bar to catch up with friends, old and new, to discuss what had been learnt that day, and anticipate the day to come.

. Day two of the Legends of Systema Seminar is now up.

Andy Seatherton has been practicing martial arts since 1972, when he began learning Judo in Exeter, Devon in the South West of England. Andy has been teaching Systema since 2012 having attended many Seminars with some of the world’s top Systema masters over the years, including Vladimir Vasiliev, Martin Wheeler and Emmanuel Manolakakis Andy is passionate about martial arts that are effective and practical, having previously studied Judo, Aikido, American Kenpo, Ju-Jitsu, Tang-so-do, European Boxing and Escrima.
View all posts by Andy Seatherton →
Tagged  legends of systema, martin wheeler, mikhail ryabko, systema seminar, systema seminar 2014, systema seminar uk, systema uk, vladimir vasiliev.
Bookmark the permalink.