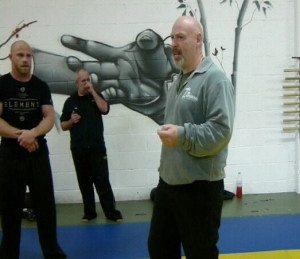 The 15th of November was an opportunity not to be missed, Mark Winkler had only been back in the UK for two days after training at Systema HQ in Toronto Canada for almost six months. His first seminar was to be at the Cardiff Martial arts Centre, where he would be passing on the skills and knowledge he had acquired from his 12 times a week training sessions with the some of the Ellet Systema has to offer.

Mark began the session with a chat about his own journey on the Systema pathway and how sometimes he has struggled with his own internal conflicts, and the conflicts of others, speaking openly expressing how these had affected him.

The number one thing that Mark gave us was the advice not to allow the problems and hang us of others to influence our own Systema, ego is an enemy to anyone wanting to get the best available from their Systema. By letting our ego dominate means we lose control, which in turn means we fall from the path. Although Mark was very open about the times he has “fallen” it was obvious this was not an “empty” lesson. Just for realising where and why you fall gives you an insight to your weaknesses and allows you to work upon them, strengthening your resolve and facing your frailties to make them resilient. This would make for a theme that would run throughout the five hours of training we had yet to enjoy, but it would not be until the end in the “circle up” that this would become apparent.

We commenced the session with a warm up on learning the correct method of walking and breathing, Mark was passing on information he had gained during his private session with Vladimir, and how it was fundamental to improving our mobility. We gradually relaxed into the session and began to move from standing to the floor, ensuring this was executed slowly and smoothly. Once down we were required to make an alteration to our initial position before regaining an upright walking structure…..”don’t look at the floor”. 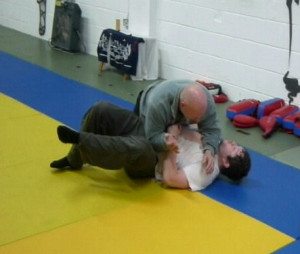 class progresses into static holds in the push up, using positions at full extension, half-way and almost touching the floor, all the time ensuring the shoulders were rotatable enabling the transference of any tension that may develop and cause fatigue in the arms.

Once we had suitably relaxed we progressed onto movement on the floor without the aid of limbs, then to using the fingers and foot to lead the turning of the body. When the feeling of freedom of these methods had begun to settle upon us the lesson transfer onto continually moving remaining on the floor, first of all with no contact to anyone else, onto rolling over each other all the time remaining in constant motion whether on top or under three or four others.

We paired up and worked the same on an individual basis, ensuring we were using our relaxed body weight to control the ability of our partner to move. All the time our partner was attempting the same. As often happens some of us began to become competitive, which lost the lesson being taught. Mark was quick to pick up on this and brought the class back onto the path we fell off.

From here we began to start to affect our partners position by the use of a push. Mark advised us not to use the palm side of the hand to push with as it could potentially present a point of injury, rather us use the rear of the hand and forearm. We were also advised to avoid using the fist at this point as if it was not used softly it could stir up the feeling of competition. 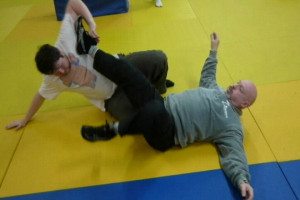 The class was then shown how to avoid our partners attack by the use of these movements, thereby alleviating the need for muscular work to get us out of problems. This was where I was getting stuck and began to look inside myself and get annoyed with me, but was blaming my partner. Then Marks opening talk came into my forethoughts and in my mind I stopped admonishing myself, and asked my partner for advice, and boom! There was the answer, no longer was I sticking.

The final lesson was to put all of the training into action against grabs. When we began it was no easy but as the tiredness kicked in I began to relax and my work felt so much lighter and smoother than when I started, everything flowed so much better. It still needs work to get better still, but that’s why we are on this journey, a journey of constant renewal, refinement and improvement. Because NO martial art will make you indestructible, it just reduces the chances of not surviving. 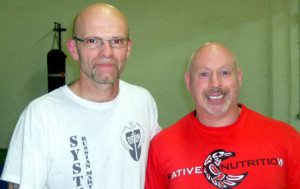 We circled up for the end of the session, and this is where it hit me. We had had a three tire lesson, yes the lesson from Mark, but we had also had the lesson provided by our partners and then the lesson we had had internally with our selves. All and all this was a session of Systema I am so glad I had, and with an instructor who has so much to offer, and who is so willing to give. Thanks Mark.

Andy Seatherton has been practicing martial arts since 1972, when he began learning Judo in Exeter, Devon in the South West of England. Andy has been teaching Systema since 2012 having attended many Seminars with some of the world’s top Systema masters over the years, including Vladimir Vasiliev, Martin Wheeler and Emmanuel Manolakakis Andy is passionate about martial arts that are effective and practical, having previously studied Judo, Aikido, American Kenpo, Ju-Jitsu, Tang-so-do, European Boxing and Escrima.
View all posts by Andy Seatherton →
Tagged  mark winkler, russian martial arts, systema seminar, systema stick work, systema striking.
Bookmark the permalink.