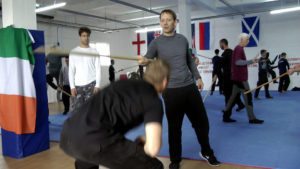 After a sound night’s sleep and a hearty breakfast, we gathered for Master Class day two. Martin began with telling us he wished to work on striking this session, but we were to begin with working with sticks. These would be initially use as a warm up method, two partners to one stick would attempt to twist the stick in different ways and directions trying to twist it simultaneously from each other’s grip whilst ensuring the shoulders are kept relaxed. This would be done whilst passing it around the body and whilst going to and from the floor. After this we progressed on to climbing up and down the stick whilst in a push up position, first with our partner holding the stick steady, then with on one holding it in any way. This was again preformed with the stick to our rear utilising a squat in place of the push up. We followed on with using the stick held by both hands in a wide grip placing on end into the floor and gradually lowering the other end until in a position where a push up could be performed before reversing the process until back to the point of origin. The final exercise involved sitting with the legs spread wide and the stick 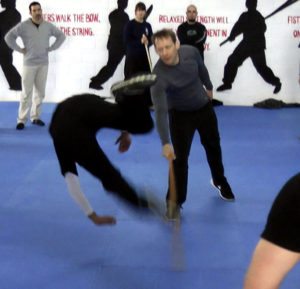 held vertically between them. From here we climbed the stick only using our arms going hand over hand until standing, then reveres the action until sitting again. The class work then proceeded on to moving around the stick as it was swung at the head and upper body using relaxed movement, “BUT” all the time keeping our partner in our vision like a “Steady Cam” (if you were there you’ll understand). The movement then evolved to the application of rolling and leaping over the stick as it was swung this time at the legs, ensuring the landing from the leap utilised the full range of the feet and legs so as not to land heavily causing injury. The class then progressed on to the avoidance of vertical strikes, which were compared to a swinging door, linear pokes and short end strikes. The class then spent the final part of the day’s first half coupling all of the lessons into one moving all directions in all planes keeping our partner in our vision. After a short water break we recommenced with a short warm up involving a static push up plank that was to be held for five minutes……hmmm! Some of us think that five minute mysteriously stretched to seven and with a lovely set of push-up on the end for good measure, cheers Martin. However after this particular warm up we certainly knew how are arms should feel when in combat. We now entered the striking phase of day two, working to begin with by finding the angles of our partners body where it could be collapsed in on itself with just the weight of the arm falling through the angles where our partner could not understand his motion. This progressed to our striking ensuring the motion for the strike came from the arm, like a swinging log, into the areas that would cause the body to collapse. We 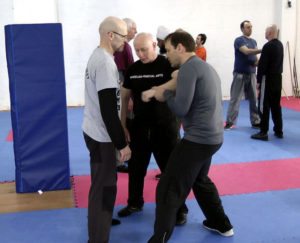 then added multiple strike using the knowledge from day one on where to hit the tension areas, which lead on to striking at those same tension lines as they flashed in to our vision, this all being aided by instinctively picking up precursors provide by our partners body language. Each partner then applied the principals of avoiding the stick to that of avoiding punches and strikes, moving in and out, up and down whilst striking to the tension lines. Finally we worked on having our hand move simultaneously with our partner’s to hide our deflection of their strikes as we again hit them in such a way that caused not only their body to collapse in on itself but also their attention. We ended as always with a circle up and plenty of anticipation for what the next day would bring.