Day Three of Wheeler Systema European Master Class saw the arrival of new students for the final days of tuition. We began by Martin explaining the biggest battle we have to fight is within ourselves, a statement we here many times in the world of Systema, but today Martin would help us to see into the abyss of panic which in turn would allow us to search out the feeling that triggers panic, begin to recognise it, gradually lower ourselves deeper and deeper into that abyss, thereby understand when panic begins to ensue and learn how to control it. This was to be by the use of self guiding exercises in the form fifteen push ups, squats and sit-ups. All of these done at slow, smooth pace whilst holding an exhaled breath and constantly looking around and observing our surroundings. We were encouraged not to allow ourselves any self-pity by focusing upon our own discomfort. After this our ability to handle the panic that arises from stressful situations was further tested by working in groups of three, one partner restraining the target whilst the third partner attacked with a knife. This caused panic to appear in the restrained partner. However this was incrementally increased by having to perform the same exercise whilst holding an exhaled breath for as long as possible before recovering through burst breathing whilst still being attacked and still being aware of your environment. Yet again the panic was taken to an extremely high level, so high Martin stressed only to attempt this if you felt comfortable to try. The restrained partner again held an exhaled breath, but the restraining partner used their hand to cover the mouth and nose of the restrained partner so the control of when and if breathing could recommence was taken away. Personally this was the most stressful training exercise I have ever attempted, myself sand several others recounted how they were physically trembling when we broke for water. We all looked very very deep within ourselves and discovered very personal levels of abilities. The second part of this third days work commenced with keeping our movements relaxed as our partner attacked with a blade at 50% speed, but fully committed to make contact. By applying the lessons learned on the previous day’s we moved intuitively from the moment we sensed any intent from our partner. Important aspects were again not to focus upon the blade, to go with our instincts, except them, and not to apply our knowledge before them, also to keep moving even if we were caught with the blade. From this point we now continued with moving in on our partner to lightly place our hand on their body, placing them where we felt the body structure would likely be disrupted. The class progressed on to activating those point to take our partners to the floor. Martin now explained how to bring our partner in to the speed of our personal work. By making our partner think about themselves by striking to those 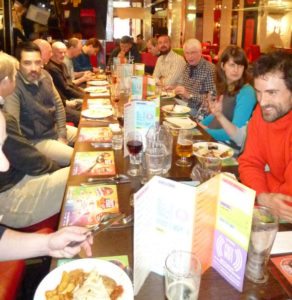 same tension lines worked on in the previous classes. The strike count was increased as we took our partners to the floor to a point where we had been able to neutralise their “want” to use the blade and they were relaxed on the floor. We continued with this work until the circle up changing partners frequently to work with different levels of psychology and physical make up. However the Wheeler Systema European Master Class debrief continued in very civilised surroundings at a local all you can eat buffet where the many calories and fluid used during our training were happily replaced. Good food, good friends and Systema what more could we wish for.