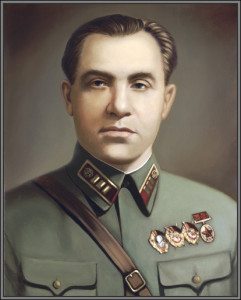 The term Spetsnaz is an all encompassing term for the Special Operations groups of the Russian military. However this term is today not isolated to just Russian military forces, such military groups as the Belarus 5th Spetsnaz Brigade and the Ukrainian Alpha group are also termed Spetsnaz. Special operation groups were first proposed in Russia by the military theorist Mikhail Svechnykov, who’s idea of a small well trained force using surgical strikes in the field to hamper and curtail a larger force’s operational abilities, were put into action by Ilya Starinov,who became known as the “grandfather” of the Spetsnaz. 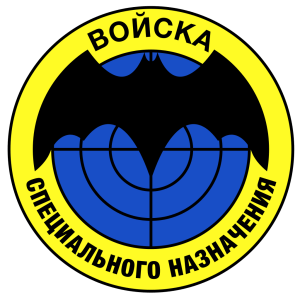 Spetsnaz is an acronym of the full title of Spetsialnogo naznacheniya meaning “special purpose”. Spetsnaz training was a closely guarded secret, even in Russia it self very little was known about them or the Spetsnaz training régime. Only those who were closely involved in Special operations directives such as the GRU knew of the full fighting abilities of the Spetsnaz. It was not until 1980 and the Mikhail Gorbachev policy of glasnost meaning “openness”, that Russian state secrets were disclosed, but it wasn’t until 1987 that the remarkable stories about the achievements and abilities of the Spetsnaz reached the attention of the western world. Books written by ex agents of such departments as the GRU, KGB, & FSB became popular reading, this would in turn lead to the growing thirst in the martial arts communities world wide to learn and experience Spetsnaz psychology and gain skills in the Spetsnaz combat form, now universally termed Systema, “the system”. 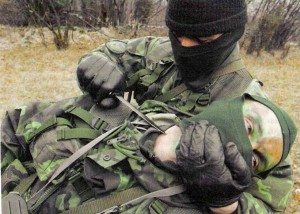 The Spetsnaz training is driven in much the same way as that of the British SAS or the American Delta Force. Specialists in covert opperations, sabotage, assassinations and reconnaissance. Having an estimated 15,000 Spetsnaz operatives all over the world with a reputation as being one of the best special operations forces in the world, which is in part due to the very harsh Spetsnaz training résumé each operative must go through. Those applying to join a Spetsnaz unit do not need to have previous military training, but they do have to go through the normal military basic training before they may attempt to complete the Spetsnaz training requirements. 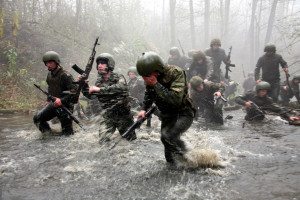 When the Spetsnaz training begins the pressure increases exponentially and is guided by pain, not just physical, but also spiritual, mental, emotional and perceptual. Each recruit is taken to their maximum threshold and and then pushed beyond. The Spetsnaz training include assault course work under live fire, martial arts instruction with live bladed weapons, including the expert use of weaponry both specialised such as the ballistic knife, and the more mundane as the basic entrenching tool, which results in many recruits receiving minor stabs and flesh wounds. They also achieve skills developing infiltration methods including foreign language and cultural acceptance training, how to overcome locking systems, silent kill techniques, parachuting including HALO (High Altitude Low Opening), survival training for long exposure to harsh environments both external and when in confinement. 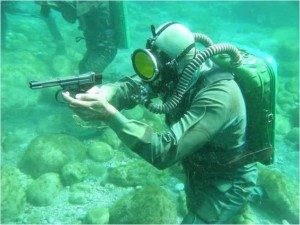 This is an amazing résumé of practical skills. However should a recruit wish to become a Naval Spetsnaz, they must, like the British SBS and US SEAL teams, acquire the additional skills of SCUBA diving, use of underwater explosives and weapons, canoeing, beach assault methods, submarine entry, and underwater swiming combat.

In 1956 a Royal Navy diver and MI6 operative Lionel Crabb vanished in Portsmouth dockyard in the vasinity of the Soviet cruiser Ordzhonikidze. It was many years later in 2007 that information came to light of a claim from Spetsnaz diver Eduard Koltsov, of an encounter with another diver allegedly attaching a mine to the Ordzhonikidze’s hull. Koltsov claimed to have despatched this diver in underwater hand to hand combat, it is believed that diver was the missing Lionel Crabb.